Currency is used to purchase various goods from Vendors some of which can be exclusive only to that Shop using a specific, possibly rare, currency. 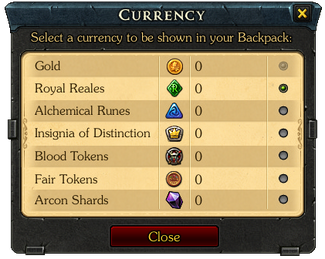 Gold is the universal currency used widely across Aura, It is the most acceptable currency used by vendors and is obtainable from killing enemies as well as breaking baskets/urns and opening chests.
Not to mention gold is the only allowed currency in the player auction house which helps ease players who would not otherwise obtain said rare item.
There are means to increase the percentage of gold acquired from drops by means of Enchantment and specific items.

The Premium in-Game currency, also known as Reales, can be used to purchase goods only in the Premium Store. These goods are highly valued as the most notable item purchasable are Royal Blessing which allows free players to acquire premium status.
Reales can be purchased using micro transactions in-game or through the main website.

For more Information about PvP Zones

Alchemical Runes can be obtained by gathering Elenium from PvPvE restricted areas.
Elenium Nodes can be found in different forms from Small to Very Large, players must make it out of the zone alive to acquire the Elenium, which is converted to Runes, and various other shadow items picked up.

For more Information about Arena and Battleground

Blood Tokens are used to purchase goods from the "Fighting" Store, the store includes a pet, mount and series of Blood Cards which are focused for PvP only instances.
To acquire blood tokens the player is needed to participate in the Arena or Battleground instances which they fight and defend to win.

Insignia of distinctions is a currency used to purchase goods from Sella the Collector whom supplies the player with unique items which can not be found anywhere else.
To obtain Insignia's you must trade in rare monster cards, the amount converted depends on the enemy which dropped the card.

Arcon shards can be obtained by participating in certain events, these events happen randomly and would display a message stating a castle has been overrun and players must destroy the arcon crystal.
These shards are used to purchase alchemical goods as well as elite and boss monster cards from Carl in Varlone.